my vote for a webby: opensecrets.org

The amazing folks at the Center for Responsive Politics‘ opensecrets.org have released (under a Creative Commons license) 200 million records to help the world understand how influence in Washington works. This is enormously good news.

Even better is that today they were nominated for a Webby. Here’s where you can vote to thank them in the best possible way.

the voting has begun — and if you’re in the wikipedia world, please participate

I can’t begin to describe how rewarding it is to see the voting start on the question whether WIkipedia should exercise an option granted to it by the Free Software Foundation to relicense Wikipedia under the CC-BY-SA license. I am very hopeful the community will choose to exercise that option.

This is an issue that has been close to my heart for years now. I have been pushing the idea of license interoperability explicitly since about September, 2005. The argument is a simple one: We need a guarantee that free culture lives on a stable, interoperable licensing infrastructure, so the weakness of any one won’t bring the whole enterprise down. To that end, we initially began conversations with the Free Software Foundation to see whether we might make the FDL directly interoperable with the CC-BY-SA license. For perfectly legitimate reasons, the FSF didn’t want to do that.

But critically, they also didn’t want to weaken the Free Culture movement by forcing Wikipedia to live with a license that was not originally drafted with the full range of relevant culture in view. So the FSF amended the FDL to permit wikis licensed under the FDL to relicense. Wikipedia is now deciding whether to do just this.

My dream is that this will start in a serious way the process we scoped out 3 years ago. We’ve already been in discussion with the Free Art License community about making their license interoperable. I’d love to see that happen generally. In my view, the critical question is what freedoms the license supports, and whether it supports it well, not who wrote the license. We’ve got a long way to go to getting there. But it would be a critical first step for the Wikipedia community to support this crucial change.

Again, as Stallman said in a different context:


“If we don’t want to live in a jungle, we must change our attitudes. We must start sending the message that a good citizen is one who cooperates when appropriate….”

Vote here (if you’ve made more than 25 edits to Wikipedia).

And a year ago, we launched Change Congress at an event hosted by the Sunlight Foundation in Washington, DC.

Celebrate C-C by joining our strike. Or even better, by donating all the money in the world (b/c that’s what this campaign stands against).

Identify your Creative Commons content to FairShare, a project of Attributor, and the service will track and report how content is being used on the web. The service is free and the technology (Attributor) is amazing. Watch (to understand or for those who want, to profit) free content spread.

From the Creative Commons blog:

YouTube just made an incredibly exciting announcement: it’s testing an option that gives video owners the ability to allow downloads and share their work under Creative Commons licenses. The test is being launched with a handful of partners, including Stanford, Duke, UC Berkeley, UCLA, and UCTV.

We are always looking for ways to make it easier for you to find, watch, and share videos. Many of you have told us that you wanted to take your favorite videos offline. So we’ve started working with a few partners who want their videos shared universally and even enjoyed away from an Internet connection.

Many video creators on YouTube want their work to be seen far and wide. They don’t mind sharing their work, provided that they get the proper credit. Using Creative Commons licenses, we’re giving our partners and community more choices to make that happen. Creative Commons licenses permit people to reuse downloaded content under certain conditions.

Visit YouTube’s blog for information. And if you’re are a partner who wants to participate, fill out the YouTube Downloads – Partner Interest form. 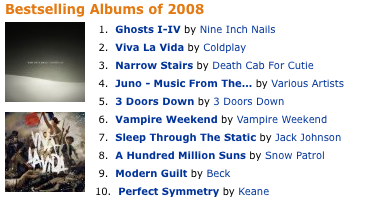 First, there’s the critical acclaim and two Grammy nominations, which testify to the work’s strength as a musical piece. But what has got us really excited is how well the album has done with music fans. Aside from generating over $1.6 million in revenue for NIN in its first week, and hitting #1 on Billboard’s Electronic charts, Last.fm has the album ranked as the 4th-most-listened to album of the year, with over 5,222,525 scrobbles.

Even more exciting, however, is that Ghosts I-IV is ranked the best selling MP3 album of 2008 on Amazon’s MP3 store.

Take a moment and think about that.

NIN fans could have gone to any file sharing network to download the entire CC-BY-NC-SA album legally. Many did, and thousands will continue to do so. So why would fans bother buying files that were identical to the ones on the file sharing networks? One explanation is the convenience and ease of use of NIN and Amazon’s MP3 stores. But another is that fans understood that purchasing MP3s would directly support the music and career of a musician they liked.

The next time someone tries to convince you that releasing music under CC will cannibalize digital sales, remember that Ghosts I-IV broke that rule, and point them here.

While most companies have cut back on their support for the Commons, wonderfully and amazingly, the most constant and forceful support continues — Sun ($50k). We’re now within $12k of making our goal — something that seemed impossible just 2 weeks ago. Massive increase in small time contributors. Thank you to all. And please help put us over the top.

ccMixter on the block

As I described before, ccMixter is up for sale. You can read a Q&A about the RFP here. Get your proposals in.

On the Texas suit against Virgin and Creative Commons

Slashdot has an entry about a lawsuit filed this week by parents of a Texas minor whose photograph was used by Virgin Australia in an advertising campaign. The photograph was taken by an adult. He posted it to Flickr under a CC-Attribution license. The parents of the minor are complaining that Virgin violated their daughter’s right to privacy (by using a photograph of her for commercial purposes without her or her parents permission). The photographer is also a plaintiff. He is complaining that Creative Commons failed “to adequately educate and warn him … of the meaning of commercial use and the ramifications and effects of entering into a license allowing such use.” (Count V of the complaint).

The comments on the Slashdot thread are very balanced and largely accurate. (The story itself is a bit misleading, as the photographer also complains that Virgin did not give him attribution, thereby violating the CC license). As comment after comment rightly notes, CC licenses have not (yet) tried to deal with the complexity of any right of privacy. The failure of Virgin to get a release before commercially exploiting the photograph thus triggers the question of whether the minor’s right to privacy has been violated.

I’m not allowed to comment just now about the merits of the lawsuit. So I won’t. But I did want to comment about some obvious, and not so obvious points triggered by the suit.

First, and obviously, CC has worked, and will continue to work, to find ways to make the meaning of our licenses clear. Our aim is to provide licenses that do what the copyright holder wants. If the licenses are not clear, then we can’t achieve our aim.

Second, our desire to make our licenses clear far exceeds any obligation that may be imposed by the law. We’ve tried to make copyright simpler than Congress did (at least for the vast majority of those now regulated by copyright) (See, for example, the efforts we’ve taken to simplify the right of a copyright holder to terminate a transfer of his rights.) So too do we try to make the meaning of our licenses simpler than any standard that might be required by the law.

But third, this case does demonstrate that there is work to be done beyond the scope of what CC has tried to do so far. The CC licenses, for example, don’t purport to deal with rights of privacy. We’ve already begun to think about whether we should because of an iCommons node, or project, our chairman, Joi Ito, wants to launch called the “freesouls” project. Joi’s aim is to produce high quality images of interesting people, licensed under a CC-BY license. He certainly recognizes that means commercial entities (like Virgin) can use his photographs. But without a “model release,” such use is not simple. Making it simpler — for those who want to enable that simple use, both photographer and subject — is the objective of Joi’s project. Simpler either by a general release, or a simple mechanism to secure particular permissions. Again, the CC-BY license solves the permissions problem for all copyrights. But it does not solve the permissions problem for a publicity right, or a right of privacy.

Finally, this case does again highlight the free culture function of the Noncommercial term in the CC license. Many from the free software community would prefer culture be licensed as freely as free software — enabling both commercial and noncommercial use, subject (at least sometimes) to a copyleft requirement. My view is that if authors so choose, then more power to them.

But this case shows something about why that objective is not as simple as it seems. I doubt that any court would find the photographer in this case had violated any right of privacy merely by posting a photograph like this on Flickr. Nor would any court, in my view, find a noncommercial use of a photograph like this violative of any right of privacy. And finally, as the world is just now, while many might resist the idea of Virgin using a photograph of theirs for free (and thus not select a license that explicitly authorizes “commercial use”), most in the net community would be perfectly fine with noncommercial use of a photograph by others within the net community.

Stay tuned for more as it develops.

Thanks to the many (and I know, because I get to write the thank you notes) who responded to my request to help us increase the scholarship funding for the iCommons Summit. We are in the last days (Monday we need to decide who we can fund and who not) and we need $16,000 more from the public campaign. Please do what you can. Or maybe, a bit more than you can. We’re trying to bring as many as possible. Not many in this movement can afford a trip to Croatia without support. We want to help as many as possible.

A couple clicks and you could help us bring a couple more.