Freeing the source, for others to build upon. Read about Al Jazeera’s decision in Fred’s post for the CC blog: 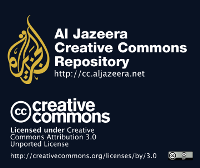 Al Jazeera is releasing 12 broadcast quality videos today shot in Gaza under Creative Commons’ least restrictive Attribution license. Each professionally recorded video has a detailed information page and is hosted on blip.tv allowing for easy downloads of the original files and integration into Miro. The value of this footage is best described by an International Herald Tribune/New York Times article describing the release:

In a conflict where the Western news media have been largely prevented from reporting from Gaza because of restrictions imposed by the Israeli military, Al Jazeera has had a distinct advantage. It was already there.

More importantly, the permissive CC-BY license means that the footage can be used by anyone including, rival broadcasters, documentary makers, and bloggers, so long as Al Jazeera is credited.
There’s more information over at Al Jazeera’s CC repository, and in our press release. You can also add the Al Jazeera repository to your Miro feeds by clicking here.